A couple of pics from the Vermont State shoot 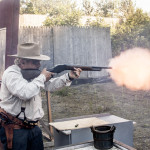 Taken at the Vermont State shoot this past summer….makes me real anxious to get back to it.

This past summer I won in a drawing from the Vermont State shoot 1000 lead cast bullets from Moulton Lead (just closed their doors, sorry to see them go) and I’m going to use them for my 45acp Wild Bunch loads. Over the last couple of days I have reduced my load from 4.8 grains of 700x to somewhere closer to 4.6 grains (the minimum per Hogdon)in order to get a bit closer to the minimum power factor allowed by Wild Bunch rules. I did find a load of which I loaded 5 rounds yesterday and chrono’ed them and 5 rounds today and chrono’ed them. Both reloading sessions returned the exact same 5 shot average of 784fps which results in a power factor of 156. The minimum power factor allowed is 150 so because I loaded the test rounds on two different days, the first day at 55°f and the second at 42°f I feel confident that I’ve got a good, repeatable load which will be above the minimum if ever tested. The reason for the power factor is to set a minimum recoil so as to avoid the “powder puff” loads which may provide some advantage to shooters. The power factor is calculated as fps x bullet weight /1000 or in my case 784 x 200 / 1000 or 156.

Posted on November 29, 2015 by Willy
Lee Shaver Long Range Soule Sight
To keep things simple. The marks on the side of the staff are a vernier scale that can be used to make .010″ graduations. You can look up the vernier scale on Wikipedia and see how it works if you have ever used on before.
A .010″ graduation basically equals a 1 minute of angle move, or one inch per hundred yards to the target.
There are 5 marks on top of the elevation knob and they represent 1/2 minute of angle each for fine adjustments that can be made without the aid of a magnifier.
For windage adjustment, the right hand knob is graduated. Each little mark is equal to 1/4 minute of angle just as most good scopes are. Every 4th little marks is numbered just so you can keep track of where you are in the rotation of the knob.
You can see the lines on the back of the staff at the bottom that were kind of dim when you got the sight. Those lines in conjunction with the center line on the body of the sight will tell you how many complete turns of the windage knob you are from center. Each complete turn of the windage knob is 3 minutes of angle, so if you are 4 lines from center then you would be 12 moa from center.
In use you adjust the sight till the elevation is correct for a specific distance and note where the lines are on the vernier scale and keep track of that sight setting in a note pad. Do the same for the windage, but the windage will vary according to how the wind is blowing.
The picture below is my sight set for 300 yards.  It is set to .45  My current load is 1.6 moa/10 yds. 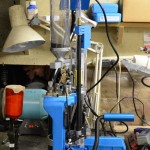 The primer mishap I had with the Lee Loadmaster was just the incentive I needed to buy a new press.  Don’t get me wrong, the Lee served me well though it did require some finesse to keep it going.  Lee … Continue reading → 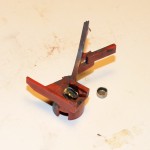 Howdy folks.  This happened back in August but I’m just now posting it here.  The full thread on SASS.net can be found here August 22, 2015 I just had my primer tray ignite in my Lee Loadmaster press.  I had … Continue reading →

Had fun this past Saturday shooting at the Major Waldron Sportsman’s Association hosted by my cowboy pard Dead Head.

My almost 12lb rifle is just too heavy for me to shoot offhand…I need to do some strength training and figure out a stance which provides more support.

I was pretty happy with my score of 8 on the first stage at 300 yards.  I was shooting my loads of 70 gr KIK 2f, a veggie wad, Lyman Postell 535 gr I cast and lubed with 50/50 beeswax/mutton tallow.  I had a couple of misses which I know I was right on the target through the trigger pull and they were nowhere to be seen.  I was shooting a mix of new, not annealed brass with older, fire formed and annealed brass so I don’t know if that had anything to do with it.  In any case I’m going to again anneal all of my brass for the next time.

I was lucky at the 300 yd target because I calculated that I needed to raise my sight 16 moa (1.6 moa or lines on the vernier per 10 yards) and hit it reasonably well on the first sighter.

I seated my bullets about a 32nd” deeper this time so I didn’t have to wrench each round in and used the blow tube between each shot.  That worked because I only needed to wrench in two rounds out of the 50 I shot.

Well, that’s it.  I have some loading to do before the next shoot on the 12th of December….hopefully the weather holds.

It’s been a while since i posted

I’ve been busy with work and I’m on a plane as I type this on my phone trying to get home in time to head to Vermont to participate in the Green Mountain Mayhem.  I have been shooting my rifle at these marches but haven’t had the chance to get to the range in between to practice.

I’m still not an expert with the vernier but have been lucky enough to guess correctly for a couple of 200m matches.  The last of which was the New England Regional a few weeks ago where I forgot my blow tube and suffered 3 misses on the final 3 shots.  Other than that my loads seemed to work fine.

They’re going  to close the door on the plane so I have to end this now, but will catch you up in another post.

In the Dead of Winter

There’s not much to do.  I have my pistols out at a gunsmith and I’m anxious to get them back. I did just received from JM Leather a custom loading strip for my Wild Bunch competition. First I’d like to show … Continue reading → 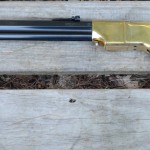 Before I bought my first gun for Cowboy Action Shooting I had to pick an alias.  Some folks go for funny names, some variations on names of western folklore, and others just simply make something up that sounds good. I … Continue reading → 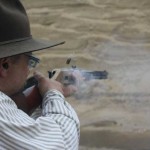 Jul 24-28 I’ve been attending every match I can this season including the states and regional.  I just attended The Great Nor’easter which was a three day shoot.  I camped on site and had a blast…even shot pretty good.   … Continue reading →